Nes church built in neo-Gothic wooden architecture in 1862 because the old stave church in Møllevegen was too small and in poor condition. The church was designed by architect George Bull (which also has drawn east and west subway stations in Oslo), was the brother of violinist Ole Bull. The new church was the biggest in Hallingdal, and colloquially referred to as “Hallingdal Cathedral”!

The Alter Image from the old stave church was moved here. The organ was put in place in 1869. The church got new altar picture in 1889 painted by the artist Axel Ender. This work was a gift from Mathilde Tandberg. There was disagreement in the village about the new church would be built in stone or wood. Wood was chosen because it was cheaper, but it was already placed a lot of building stones on the site! These were then used to build the imposing stone fence that you see around the cemetery. The chapel was built in 1954. It was designed by architect Arnfinn Rustberggard as a replica (in smaller scale) of the old stave church that unfortunately was demolished in 1864.

The chapel is a cruciform church that was built in 1953–54 and the burial chapel at Nes cemetery. The chapel was built as an imitation of the local stave church, which was demolished almost a hundred years earlier. 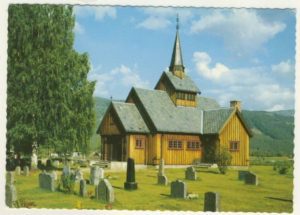 Nes Stave Church was a stave church in Nesbyen. It was demolished in 1864, two years after today’s Nes church was consecrated. The stave church was approx. 500 meters northwest of today’s church, and the site is still visible. A sign on the site dates the church to the 13th century.

There has been at least one former church on the site, because in a fire layer that covers large parts of the site, fire-damaged foundation walls have been found. Graves have also been found which, from their orientation, are obviously older than this, but no definite traces of an even older church have been found. The burnt down wooden church must have been approx. 8.8 meters long. These finds are from an excavation in 1965 when the stave church site was uncovered and preserved. 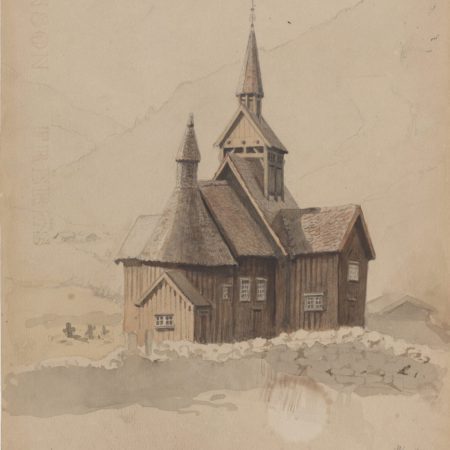 The Stave Church in Nes, immortalized by Adolph Tidemand in 1848, 16 years before it was demolished.

The stave church, which was demolished in 1864, was measured by Hans Gude in 1850 and Georg Bull in 1855 and is thus better known than many other stave churches that suffered the same fate. The stave church was originally a long church that eventually had an apse in the choir, and in the second half of the 18th century it was expanded with half-timbered cross arms and an armory to the west and a sacristy to the east.

From the stave church, building parts and decorated details have been preserved in a number of places, including the Cultural History Museum and the Hallingdal Museum. The altarpiece and the baptismal font from the stave church were transferred to the new church. The altarpiece has since been replaced by a new one, but the painting, depicting the crucifixion, is still in the church. The baptismal font’s basin (of soapstone) is in use today and has been given a new base.

In the old cemetery is a parish house that seems to be in relatively poor condition, and there are still some grave monuments on the site.

In the cemetery by today’s Nes church, a Chapel inspired by the old stave church was built in 1953–54.

Nes Mountain Church is located by Grønhovd in Nes Nordmark, around 1000 meters above sea level. The church was completed in 1994.

In addition to church rooms, there are e.g. accommodation on the 1st floor and fireplace lounge and kitchen on the 2nd floor. The church is also used for weddings and services.