The art walk if part of «Art landscape Nesbyen», consisting of the walk and the indoor exhibition «Into the art». The walk if free to do on your own.

Explore outdoor paintings on display along a route through Old Nes and along the river Rukkedøla, at your own pace. The paintings are mostly from Nes and were painted by some of our greatest artists in the 1800s and 1900s. Free brochure with map is available at Nesbyen Tourist Office (Mon-Fri 09-15), or in digital version here. During the summer, a guided tour is offered (NOK 60 per person, approx. 1 hour).

The background for Art landscape Nesbyen

In the years 1843 – 1852, Nesbyen became a local center for the national romanticism in Norwegian painting. At this time, Ove Gude worked as a Magistrate in Nesbyen. His son, the eventually famous Norwegian painter Hans Gude, came regularly to visit his father and brought several of his artist friends to Nes. Of these we can mention the painter Adolph Tidemand, the composer Halfdan Kjerulf and the author Jørgen Moe. The works of art they created during their stay in Nesbyen can now be seen exhibited in the same place where the artists stood when they painted.

The story of Hans Gude

Hans Gude was born March 13, 1825 in Christiania. He was the son of Marie Elisabeth and Ove Christian Gude. Hans showed special skills in drawing at an early age, and as a 12-year-old he got Johan Flintoe as a teacher. Flintoe, who was half Danish, is considered the first national romantic painter in this country.

The period we call national romanticism in the art of painting, we calculate from about 1840 to about 1860. The national currents had arisen in the German states during the Napoleonic Wars, and had also taken hold in Denmark and Sweden. When Norway separated from Denmark in 1814, there was little of our cultural life that could be called typically Norwegian. The little we had of culture largely had patterns from abroad. Nevertheless, at the local level, most people all over the country lived culture in the form of folk songs, folk music, and fairy tales and legends. They were good entertainment around in peasants and farmers living rooms.

Locally we can mention that all these were living traditions in Nes. In addition, it is also worth mentioning Jørgen Garnås who was a master at carving figures out of wood. In the early 1760s, this led to these figures being used as models for the stone statues that were to adorn the newly built Nordmandsdalen in the park by Fredensborg Castle on Sjælland. He even received an artist’s salary from the king, and not many Norwegians could boast of this. Copies of 5 statues from Nordmannsdalen, which depict farmers from Nes, are set up in Garnåsparken right behind the bank / culture building.

The national romanticism became a cultural flowering period that the country has never seen before. After Norway and Norwegians had “played the 2nd, not to say the 3rd violin” during the union period, ie for over 400 years, it now became important to show that we also had qualities that could measure up to the level in our neighboring countries.

We can mention figures such as Bjørnstjerne Bjørnson, Halfdan Kjærulf, Ole Bull, Jørgen Moe, Peter Christen Asbjørnsen, Ivar Aasen. Among these cultural giants Hans Gude naturally found his place. He became the landscape painters great role model and teacher. Not only revered in Norway, but his fame stretched far beyond our borders.

When Johannes Flintoe began to use motifs from Norwegian nature in his paintings, in the second decade of the 19th century, this became, so to speak, a kind of aha-experience for Gude, and inspired him to embark on the same path. Already as a 14-year-old Hans traveled for the first time over the mountains to «Bergens Stift». Such a journey has probably passed over Hallingdal, and has been a bit of a challenge for a young boy. Maybe he traveled through Nes as early as in 1839?

On this trip he made several drawings with motifs from the nature they traveled through. One of these drawings was seen by the poet Johan Sebastian Welhaven, and he put a lot of effort into getting the boy to study art. As there was no art academy in this country, he had to go abroad. At the age of 16, he traveled to Düsseldorf in Westphalia, which then belonged to the German state of Prussia.

The fact that he left so early meant that he had to drop out of school at the Latin school. This was pretty special, and was not at all something you could just do at that time. Here one could have expected that the father, Ove Gude, could have put his foot down, and demanded that the son should complete school before anything else came up. It was also not obvious that Hans should be allowed to invest so completely in an artist career at all.

This would be very special in a country that, to a degree, had little art to begin with. It might have seemed almost impossible to imagine a career as an artist. It is, to a large extent, Ove Gude’s merit that the son got the opportunities he got.

National romantic period Painting with motif from the waterfall at Nesbyen

His stay at Nesbyen with his parents made more than artistic impressions on Hans. In 1851, the school in Nes received a book gift of 105 books from Hans Gude. These books were to be distributed to “needy children” in the village. 49 years later, ie in 1900, a request was sent out from the newly established Hallingdal Folk Museum to individuals for financial support. Then we see that there has been a payment of NOK 150 from Hans Gude, who was then a professor in Berlin.

The painting in the bank in Nesbyen Center is a clear national romantic period image, and is from a place by Rukkedal waterfall. It is typical of Gude that he was not a slave to render nature photographically. He was an admirer of J. C. Dahl’s art all his life, and considered Dahl a role model, yet he did not copy his role model in this regard. Dahl’s pictures were exactly as the motif looked, ie almost like a photograph. Then we disregard the use of light and darkness as effects in a painting, something Dahl also used.

The Düsseldorf School taught that naturalism does not necessarily have to be true to nature in the extreme. Once accurate sketches had been taken, the artist was free to use the details as he saw fit. We see this in all the pictures from Nes where we recognize the places where Gude stood. There are always some things that have changed. In the “bank painting”, we recognize the features of nature around the waterfall area well, but it is not possible to find out exactly where the motif is taken from.

It is also probable that he put the mill and the house in the foreground. It is very unlikely that there may have been a mill on that side of the river. For that, there was far too rough terrain up behind the mill. Otherwise, most things are in place when it comes to the characteristics of a national romantic image: the contrasts in nature with the dramatic by the wild waterfall and gorge area, and the idyll with the bunad-clad couple that should almost indicate Sunday peace by the small house by the waterfall. In addition, the contrasts in the use of light and darkness are mandatory. 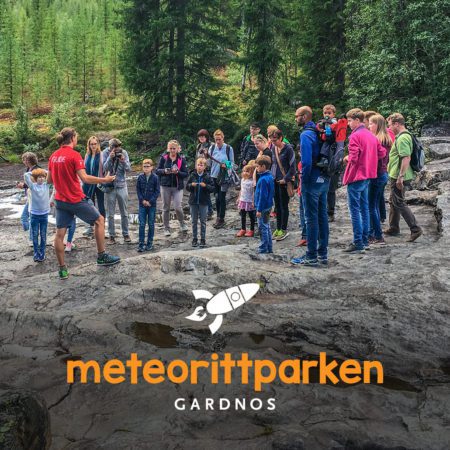 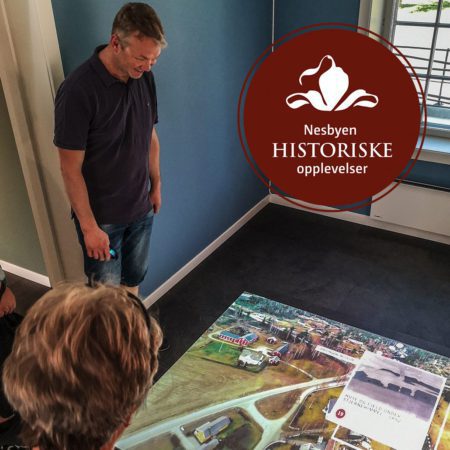 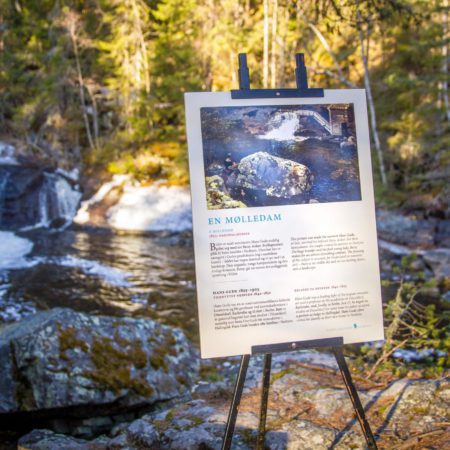 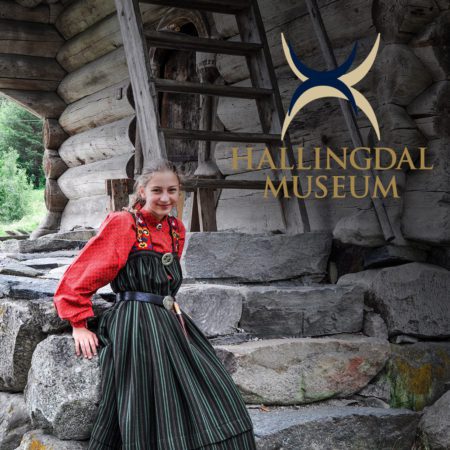